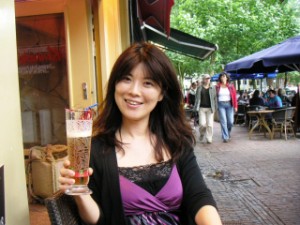 One of my very good friends is an amazing female entrepreneur.  Over coffee this morning she told me this amazing story.

Last Saturday, she met a new client for lunch in a local coffee shop bistro.  It was supposed to be a straight forward business start up meeting with this lady for an online internet marketing business.  It was a hot day and they sat inside the restaurant in the cool air conditioning.

My friend had her handbag sitting on her lap with her arm resting on top of it but did not have her arm through the strap.  They hadn’t been seated for very long when my friend’s handbag was taken from this position – and she didn’t feel a thing!

It took her client to point out several times that a young well dressed guy had just snatched her bag and was now out the door and running away down the street.   By the time my friend came to full realization of what had just happened the guy had a considerable head start.

She described him as being in his twenties, tall, of slim build and well dressed in casual clothes.  My friend is about 5’7” (170cm), almost twice his age, not so fit, with a heart condition and was wearing high heels.

She mowed this guy down inside two blocks (in high heels).  She recalled that after sprinting down one block she was running out of gas fast.  With a ‘now or never’ attitude she found overdrive and scorched down the second block running on pure adrenalin.

His mistake was to turn a corner and stop to see if she was still chasing.  She was, and as she rounded the corner, the guy took off again up a short hill.

She planted her hand into the middle of his back and grabbed a handful of shirt.  Some how without losing her own balance, she kicked him in the back of the knee and felled him to the pavement like a steer that had just been roped.  The momentum caused him to skid for a metre or so to a skin grazing halt.

Without allowing him to take his face out of the pavement she reclaimed her handbag and let him have it with a few well chosen expletives.  Unfortunately for the thief, that section of pavement was finished with exposed aggregate.

He wasn’t a pretty sight when he staggered to his feet bleeding profusely from gravel rashes on his face, hands and forearms.  He ran off and once again stopped (slow learner) at the next corner to look back to make sure he was free and clear.

He wasn’t!  Moments later a police car entered the street and followed in hot pursuit.  Fortunately, someone in the footpath crowd, which moments before had magically parted like the Red Sea, had called the cops.

My friend hasn’t had as much as a minute of tuition in any martial art, but due to her profession she does have a deep understanding of the Universal energy.  She said she connected with the thief and stayed connected.  The rest was pure heart and adrenalin (and her body’s distant memory of high school running).

Knowing I am an Aikido practitioner, my friend said she realises that it wasn’t the aikido thing to do to run after a thief or a mugger but, without conscious thought, as her primal fight or flight reaction kicked in, she decided that she wasn’t going to be a victim.

Who was I to argue?

Post Script: When she finally recovered from the shock, spoke to police and returned to her client at the restaurant, they decided the business start up could wait a couple of days and went to the pub!